Preview – Who are San Jose Earthquakes?

It’s fair to say that most MUFC supporters won’t be deeply familiar with Tuesday’s friendly opponent – San Jose Earthquakes of MLS. So here’s a brief thumbnail sketch for you, with some surprising links to MUFC.

The Quakes are presently on their third incarnation as a club in the USA. Like many clubs in America, they have ties to both the old North American Soccer League [NASL] as well as today’s MLS [Major League Soccer].

The club was founded in 1974 as an NASL expansion team and played in the league until it’s 1984 demise. Three more years followed in the fledgling Western Soccer League, but this came to an end in 1988.

This era saw two ties to Manchester United. First, the club was briefly coached in 1980 by Munich survivor and Reds legend Bill Foulkes. The Quakes also were represented on the playing side by another MUFC legend – George Best. The club had both outdoor and indoor sides during this era, and Best turned out for both – notching a combined 54 goals in 77 appearances. Check this video for some magic from the Northern Irishman:

The San Jose franchise was rejuvenated in 1996 as one of the 10 founding MLS clubs, going by the moniker San Jose Clash – before being renamed Earthquakes in 1999.

The club won the MLS Cup in 2001 and 2003 [this is the playoff winner and champion of MLS, not the team with the most points] with help from a young Landon Donovan. The Quakes also won the Supporter’s Shield in 2005, which is awarded to the club with the highest season points total. The Earthquakes went on hiatus again from 2006 until 2008 during a squabble over a soccer-specific stadium. 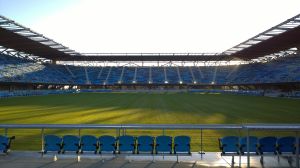 Today the club are in their own, brand new facility – Avaya Stadium [capacity 18,000] and have a strong season ticket base of around 12,000. They have had Supporter’s Shield success again in 2012 and are captained by two-time MLS Golden Boot winner and USA international Chris Wondolowski. The skipper has scored more than 100 MLS goals and is the club’s all-time top scorer.

The team is currently coached by Scottish-born, but USA-capped Dominic Kinnear, who is enjoying his second spell in charge of the Quakes.