It’s been a while since we’ve had a fresh Reds of the World, but don’t fret – we are back!

Our host this time around is Vishnu Prasad [give him a follow @visheprasad] from the southeastern Indian city of Chennai. The city is known for spectacular food, a red-hot economy and as a travel destination not to be missed.

But if ROTW has taught us nothing, it’s that it doesn’t matter where you go on this big, blue marble of ours – it won’t be long until you see a Red or two. In fact, there are many branches of the official supporter’s club in India – and the lads from MUFC Chennai also host regular screenings. Let’s get to Vishnu with his answers.

My name is Vishnu Prasad. I was born and brought up in this sleepy city called Thrissur in the state of Kerala in India and I currently work as a journalist in the far-bigger city of Chennai. Thrissur is really famous for one thing – we host this festival called the Thrissur Pooram that is routinely described by everyone including the BBC as one of the must-see events in the world. Chennai is one of the biggest cities in India – one of our five metros.

I started supporting Manchester United in the pre-internet, pre-hundreds-of-tv-channels era – my friends and I were probably the first generation in our city to be exposed to the Premier League. My first season was 1996-97 which is when I started getting cable TV. We had two sports channels (ESPN being one of them) and they were telecasting the EPL all the time. I guess Manchester United was a natural fit because their matches were on all the time and they were always winning (I was 8 then, so wasn’t looking for much else). But by the time the 1998 World Cup came around, I was enough of a fan to look out for United players in every team. And a 10-year-old me was hardcore enough to fight the parents for permission to stay up past my bedtime for the ’99 CL final which aired at 1.30 am in India. 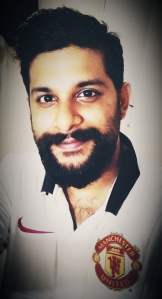 Following the club is far more convenient these days – but it was the highly inconvenient, but so much memorable time spent following the club as a kid that instilled the love in us. We had to scrap just to find out when the team was playing that week. My friends and I used to spend transfer deadline days in internet cafes until they would tell us to go home as they had to shut down. I remember watching BBC news (the only British news outlet we had then) for an entire day waiting for confirmation that Wayne Rooney had been signed. It may not quite be going to Old Trafford every week, but we sure had our fun!

I’ll say… Carrick. I remember being really pissed when we had that transfer window where Fergie only signed him, but what a signing he has proved to be! One of those players whose absence you feel only when he isn’t there.

The player that Carrick took his shirt number from – Keano. It was really hard not to absolutely adore him at his peak. Not just his game, but the sheer balls that he displayed on the pitch! And when he showed Vieira his place, he became a cult figure for us.

The 1999 Champions League Final is hard to top, but I’ll choose another moment because of the memories.

The year was 2003, where we had no internet at home and the local newspaper hardly carried anything about English football. We were still kids, so all the United discussion was limited to fellow fans in school. Sportscenter was where we learnt if the club signed someone but when Fergie signed this kid called Ronaldo, it had gone under everyone’s radar. And then he made his debut against Bolton and we were all buzzing in school the next day. Nobody quite knew who he was, but everyone was talking about the kid with the twinkly feet and the weird hair! I still remember the excitement that day!

Never been to Old Trafford but will go there before I die. Never seen the team live either, but thanks to the Indian Super League we have here and my job covering it, I’ve been able to meet and interview a number of former United stars including Silvestre, (the legendary) Eric Djemba-Djemba and (the even more legendary) Bojan Djordjic.

My group screenings have so far been restricted to my college days (which I spent in Thrissur) when 10-20 fans would gather together every weekend with a number of heavily outnumbered Liverpool fans (who would go back disappointed whenever both teams played at the same time!).

Chennai has a fully functional fans club (shout out to @MUFCChennai) who regularly organize screenings, but my work hours mean that I have to watch most matches in the office. It’s great though because we have a number of United fans here as well. I try to rush there when United hold club events in the country (there was a recent one in New Delhi).

The 1500 kick-off is brilliant for us as it’s 8.30 pm here in India. It’s the Champions League clashes that are quite a problem for us here, with the match starting around 1 am in the morning. This year though we were able to add another new time slot to our United schedule. Pre-season friendlies were broadcast live for the first time in India and that meant staying up till 5 or 6 in the morning (or waking up then for the others) to catch the team live in the US.

Unfortunately, football is nowhere near the most popular sport here (cricket is what Ronaldo claimed to be – number 1, 2 and 3). The national football team consistently ranks around the 150s and regularly plays out before empty stadiums. But all that will hopefully change soon. Some of the Indian Super League stadiums drew in 50-60,000 people every match and that shows that football is alive and kicking here.

I still feel we are one proper striker (despite Martial) short of winning the title and think we’ll finish second behind the idiots next door (we’ll see them when the oil wells run dry!).

Sounds outrageous but I think we have a good chance of doing well in the Champions League, even winning it if we’re lucky. Van Gaal did well against every big team last year and tends to get his tactics spot-on against them. The one factor that hampered Fergie in Europe is that he always seemed to have a light-weight midfield, but that is not the case this year (one of our best in years!). We’ll be very difficult to beat over two legs and that goes for anyone.